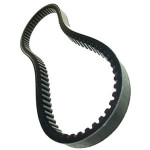 A drive belt, often called a serpentine belt, is a rubber belt looped around several pulleys that is rotated by the engine crankshaft transferring the power to the vehicle’s peripheral systems. Some of the components the drive belt powers are the alternator, power steering pump, water pump, air pump, windshield wipers and air condition compressor. The belt may also be guided by an idler pulley and or a belt tensioner pulley.

Whether your belt needs to be tightened or replaced our North Attleborough drive belt services can have you back on the road in no time. Our experienced mechanics will inspect the belts for cracks, inspect the pulleys and bearings, remove and replace any damaged or worn parts.